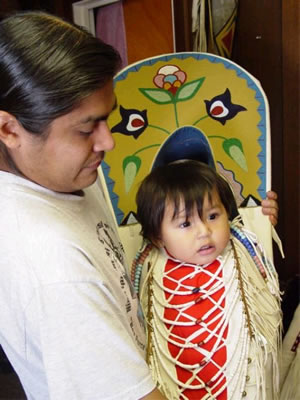 Josiah Blackeagle Pinkham is Nez Perce or Nimiipuu. He resides on the Nez Perce Reservation in Lapwai, Idaho. His Nez Perce name is Tipyelehne Cimuuxcimux and it is commonly translated as Blackeagle. Josiah’s father, Allen Pinkham Sr., is a Nez Perce and Josiah’s mother, Shirley Mosqueda, is a Yakama. There are many figures in his family that would be known by historians. Some of them are Red Grizzly Bear, elder Chief Joseph, and John Pinkham who fought in the Nez Perce War of 1877 as a young man.

Originally the Nez Perce occupied southeastern Washington, northeastern Oregon, the central area of the northern Pan Handle of Idaho and western Montana. Today the reservation is near Lewiston, Idaho, where the states of Washington, Oregon and Idaho meet. There are high mountains, lots of forested areas, beautiful rivers and valleys.

Josiah is an Ethnographer, which involves cultural research and documentation. He graduated with honors from Lewis and Clark State College in Lewiston, Idaho with a degree in Native American Studies and Psychology.

He shares storytelling, history, culture, very early oral traditions that were learned from elders, and stories that were documented a long time ago. Josiah often shares the Nez Perce creation story as well as numerous coyote stories. Some stories are about family history and the Nez Perce War. He also knows first contact stories of the Nez Perce with white people. He likes to give a variety of backgrounds of past and present life, and where the Nez Perce will be in the future. He is knowledgeable about Nimiipuu material culture and cultural and arts and crafts. When giving presentations, Josiah brings many items of material culture such as craftwork, beadwork, isaaptakay, or parfleches, which were used to carry food, clothing, tools, etc. A lot of the items he or his family made or were inherited from his people. He also discusses the history of some tribal dances and songs, and occasionally sings songs as a part of his presentation. One cultural practice he has learned about from his elders is the Qiloowawya. It is a ceremony that was held when the Nez Perce were sending people off to Buffalo country, battle or a long journey. He also discusses issues regarding the environment, health, tribal government, tribal politics.

Josiah has given presentations to groups of all ages and backgrounds. The groups include young children, college students, tour groups, elder hostel programs, museums, and interpretive centers. His talks have taken him all over the northwest in Washington, Oregon, Idaho, Montana and Wyoming, as well as several trips to Europe for cultural exchanges.